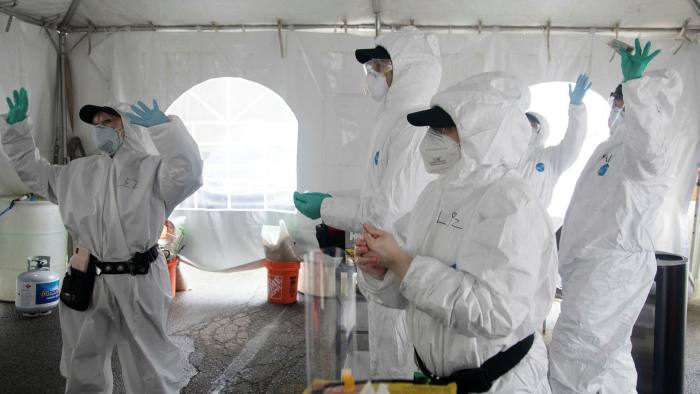 Operation Masks and the battle against coronavirus price gouging

Robin Chan’s organisation should not exist, argues the San Francisco venture capitalist who introduced Didi to Uber. But Operation Masks, the non-profit initiative he helped launch in response to the coronavirus pandemic, is needed because America’s healthcare system is “so broken”.

As states and hospitals scramble to secure the masks and gowns needed to protect health workers on the front lines of the battle against Covid-19, individuals and companies from Apple to Salesforce are bringing their money, contacts and supply chain expertise to the fight.

But a lack of co-ordination is driving up prices, compounding the supply crisis. In the weeks since he began filling orders for 3m items of personal protective equipment from customers including New York State and Hawaii, Mr Chan has seen PPE prices rise fivefold. He has seen middlemen offering $2 N95 masks for $13 each.

“In a functioning, rational model [Washington] should organise this in co-ordination with the states,” said Mr Chan.

Prices for masks are “all over the place”, said Rob Bailey, founder of supply chain data automation company BackboneAI, who has found masks on sale for between $3.50 and $7 in his work with groups sourcing PPE.

Others are paying even steeper premiums. New York’s hospitals have seen manufacturers’ prices rise to “five, 10 [or] 20 times what they were historically and nobody knows how to process that”, said James Patchett, chief executive of the New York City Economic Development Corporation, which is helping local officials vet suppliers.

Some factories are price gouging, said Nathan Resnick, chief executive of Sourcify, a sourcing platform for manufacturers. “When you don’t organise demand in times of crisis there are companies that are going to take advantage.”

For Remy Garson of iBrands Global, whose company has switched from making clothes and luggage to sourcing millions of N95 masks, the crisis has created an unprecedented sellers’ market.

“The Chinese have factories that say ‘this is the price; it expires at midnight and goes up by 30 cents tomorrow’,” he said. Only those who show up on time with cash can secure products. “Normally, we’ll pay them 30-60 days after we receive the goods but these are not normal times.”

In Illinois, officials had to race to a McDonald’s with a cheque for almost $3.5m to prevent a middleman from selling the 1.5m N95 masks they had secured to another buyer.

Hospitals in Shawnee County, Kansas, have similarly been promised deliveries only to be “bumped”, Gianfranco Pezzino, the county’s chief health official, told the Financial Times.

“These politicians have . . . now communicated the price they’re willing to pay for the gloves and masks. When that happens you don’t think these Chinese factory owners see that?”

The toll on hospital budgets has been compounded by the need to use far more PPE than usual when treating contagious patients. One healthcare procurement group estimates that a 100-resident nursing home must spend $10,000 more than usual each day to meet regulators’ requirements.

While established manufacturers such as 3M have held prices and sued alleged gougers, many buyers have been forced to turn to unvetted suppliers.

“It is stunning the number of people whose uncle’s best friend’s cousin is a mask manufacturer in China and can give you 3m masks at cost,” said NYCEDC’s Mr Patchett. Many fail to deliver what they promise, however.

“I see emails from people saying ‘Hey, I hear 2,000 masks are available here’ and I don’t know how long these masks have been in storage or where they were manufactured,” echoed Dr Pezzino.

The Kansas doctor said the disorganised bidding war showed that America’s pandemic plans and stockpiles have fallen short. “My sense is everybody is on their own in trying to procure supplies,” he said, warning that the lack of co-ordination is costing health systems dearly.

High-profile state and federal orders, such as California governor Gavin Newsom’s pledge to spend nearly $1bn to import about 200m masks a month, may even be exacerbating the problem, said iBrands’ Mr Garson.

“These politicians have . . . now communicated the price they’re willing to pay for the gloves and masks. When that happens you don’t think these Chinese factory owners see that?” he asks. After the first large federal order, he said, prices went up 25 percent in a week.

The rising costs of imported PPE have narrowed the usual price gap between Chinese and US production, prompting some cities to turn to local manufacturers.

It took four days from New York City asking for plastic face shields for NYCEDC to organise production, said Mr Patchett, and its orders for hospital gowns will bring more than 1,200 New Yorkers back to work by the end of April.

Beyond then, Mr Chan sees “an incredible patriotic opportunity” to invest in domestic manufacturing to be less reliant on China.

For now, though, Shafqat Islam is still getting a request a minute from doctors and nurses in New York who still do not have enough masks. The tech founder behind the non-profit 1M Masks initiative has so far raised $400,000 from start-ups and venture capitalists and delivered 105,000 KN95 masks for free.

“If all of New York City hospitals are dependent on me to give them masks, we’re totally screwed,” he said. “I don’t want to be in the mask business forever.”