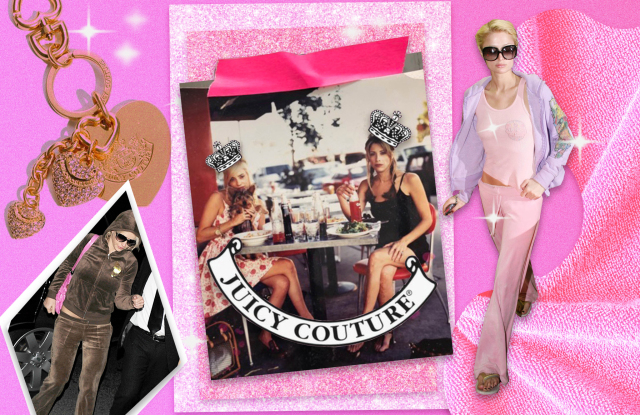 Back in Juicy Couture’s mid-2000s heyday — when everyone from A-list celebrities to suburban moms was clamoring for the label’s trademark velour tracksuit — co-founders Gela Nash-Taylor and Pamela Skaist-Levy were often seen in identical furs and outlandish baubles. They might have looked like fashion eccentrics to some, but the pair were the brains and brawn behind the global brand.

In “The Glitter Plan,” their tell-all business tome out May 29, the duo hope to clarify “just how involved we really were,” says Skaist-Levy, 51.

The self-taught moguls met while working in a Los Angeles clothing boutique in 1988 and launched a self-financed maternity line — each partner contributed $100 — later that same year.

In 1994, they parlayed their success into a range of luxury cotton shirts under their new Juicy Couture label — and in 2003, they sold their company to Liz Claiborne for $56 million, with a $200 million earn-out.

“When we started, we didn’t know what we were doing, but we were fearless,” says Nash-Taylor, 51.

Here, the loungewear tycoons, who will be signing copies of their book June 5 from 6 to 9 p.m. at Bloomingdale’s on 59th Street, share their top tips for Juicy-style success.

Pick the perfect partner
The best decision Nash-Taylor and Skaist-Levy ever made was to go into business together.

“You spend more time with a business partner than almost anyone,” write the duo, emphasizing the importance of finding a like-minded co-conspirator. “Is this someone you trust and want to do tequila shots with?”

For the longtime best friends, a self-described “symbiotic” relationship made business easier (“We were always bouncing ideas off each other,” says Skaist-Levy) and more meaningful.

“For all of these crazy milestones we reached, we would crouch under our desks together and laugh and scream and cry,” says Nash-Taylor.

They also had a built-in support system when they hit roadblocks — like a warehouse employee who was caught running a Juicy theft ring.

“When you’re together, the highs are even higher,” explains Skaist-Levy, “and the lows don’t seem so bad.”

Walk before you run
Though Nash-Taylor and Skaist-Levy maintain they “thought big” from the get-go, they made a point to start small.

Their line of maternity jeans “ended up being our equivalent of business school,” the duo write.

Enlarge Image
Juicy Couture celebration of Fashion’s Night Out
Getty Images
And when they shifted gears to launch the Juicy Couture label, they started with just a single product: a perfect-
fitting V-neck T-shirt.

Enlarge Image
Juicy Couture’s Fifth Avenue opening party
Courtesy of Pamela Skaist-Levy and Gela Nash-Taylor
“When you start with a very small thought, you can kill it and really make it incredible,” says Skaist-Levy, who, along with Nash-Taylor, obsessively cut, fit and dyed their original design until it was scooped up by department stores.

Find your cheerleaders
When it came to staffing their growing venture, the partners looked for two things: a can-do attitude (“We like entrepreneurial, independent-thinking people,” notes Skaist-Levy) and an unadulterated passion for the Juicy brand.

“You have to find the people, the sales reps and the contractors who believe what you believe, who are part of your crazy cult,” says Skaist-Levy.

They saw such a partner in Elsa Gonzalez, their first employee.

Originally hired to clean the founders’ office, she so wowed Skaist-Levy and Nash-Taylor with her drive that she went on to run the company’s warehouse.

Still, there were plenty of naysayers.

The first bankers they met with were dismissive, essentially scoffing at the idea that anyone would be interested in buying a company of their size.

Nash-Taylor and Skaist-Levy were unfazed — and along the way, they learned an important lesson, says Skaist-Levy: “If somebody is that opposed to [your idea] or doesn’t get it, move on.”

Expect the bumps — and learn from them
Early on, Skaist-Levy and Nash-Taylor received a piece of advice that would serve them well over their careers: As Juicy Couture’s presidents and co-CEOs, their job was to solve problems.

“I remember complaining to my dad that I felt like a school principal, with everyone coming into my office with some crazy problem,” says Nash-Taylor. “And he said, ‘But that’s your job.’ ”

The new outlook made the endless stream of small and not-so-small setbacks feel much more manageable.

“We learned so much from the mistakes we made,” says Nash-Taylor, citing an early costing error that taught them how to price their products.

“If you apply common sense and problem-solving and you do your homework, anybody can do it,” adds Skaist-Levy. “I recently read that 80 percent of small businesses fail. It didn’t even occur to me that we could fail.”